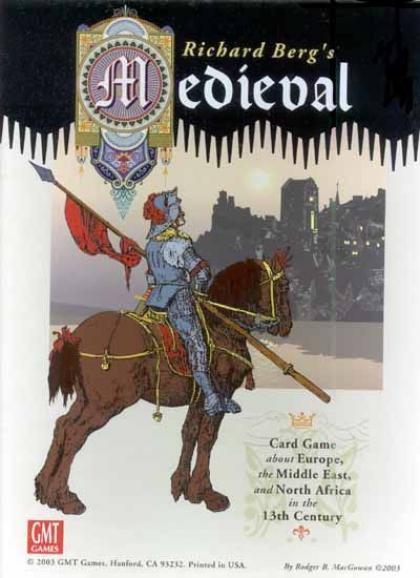 From the publisher's web page (Medieval):

Medieval is a card-based board game that takes players back to the turbulent 13th century in Europe, Middle East and North Africa. The cards not only represent the Powers, various capabilities, and events that the players use to gain victory, but they also provide the playing board, a map that is divided into 19 Cards, only 8 of which start the game in play. The rest of the Map Cards - and the map - come into play randomly, but at the players' pace.

The remaining cards are for the 27 Powers - countries from the strong but troubled Holy Roman Empire, England and France, through the various Islamic powers, down to such minor, but important, countries such as The Kingdom of Jerusalem, Livonia and Trebizond. Even such mysterious and far away areas as Polovtsy and The Cumans come into play. - and the various "events" the players use to forward their schemes.

Each Player represents an ever-changing conglomerate of these Powers, using his wiles, and the cards, to further his control over areas of Europe to win the game. There are Spies, Assassins, accusations of Heresy, Jihads, even the use of the various Knights of Christ.

And then there are the Popes. Each player, randomly, can become Pope (they're named and historical). As Pope he can arrange alliances, excommunicate players, and call for Crusades (a great way to make money).

But hovering like a very, very black cloud over all of this are The Mongols. No player knows exactly when they start to arrive, although the card play does give them hints … and some time to prepare, if they choose to heed the warnings. But when they do arrive, all Tartar Hell breaks loose, as The Mongols, also represented by cards, literally eat the map, east to west, conquering Powers, chewing them up and making them disappear from European view.

The winner is the player who survives the onslaughts of religion and the Mongols to control the largest part of 13th century Europe.

Medieval is for 3 to 5 players and takes around 2 hours to play, once you've learned the system. It comes with 110 cards, lots of little pieces, and coin-shaped florin markers.