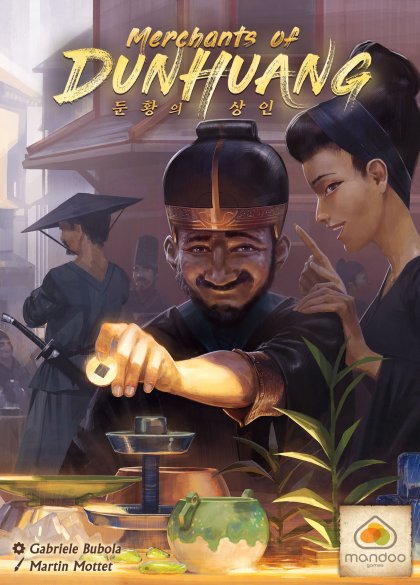 Dunhuang was a major transit point on the Great Silk Road. Caravans loaded with spice, silk, jewels and gold cross the city, a city that never sleeps. In the middle of this organized chaos, rich and powerful merchants are gathering supplies and goods to sell them and increase their influence. You are one of them. With the help of the local people of Dunhuang, you&rsquo;ll try and become the most prestigious merchant of the city.&#10;But you&rsquo;re not alone in this business&hellip;&#10;&#10;To begin the play, set up eight character tiles on the table, all of which have different skills. The character tiles are double-sided with different characters on each side, so 16 characters in total for the huge amount of combinations. Goods cards have a value from 1 to 10, with only one card with value 1 and ten cards with value 10. On your turn:&#10;&#10;&#10; Move the &quot;camel&quot; on the current character tile to the next tile. If you want to move more, pay coins to move further.&#10; Pick up the goods card on the tile to add it to your shop (in front of you) or your warehouse (your hand).&#10; Use the character skill on the tile or collect three coins.&#10;&#10;&#10;Depending on the the number of goods in your shop, you can take the corresponding majority token. The game ends either:&#10;&#10;(1) When no more cards are in the deck, at which point a majority token is worth 1 victory point, and the majority of each goods in their warehouse(hands) is worth points equal to the goods' value, or&#10;(2) When any player has four different goods in hand and has collected four majority tokens, at which point they win the game immediately.&#10;&#10;&mdash;description from publisher&#10;&#10;