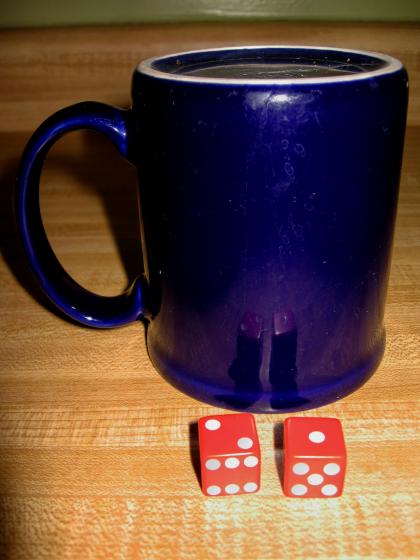 Mia is an ancient bluffing dice game using two dice and a cup to conceal the dice. It is believed to have been played by the Vikings. There are affinities with Liar's Dice (and the card game Bullshit), but also some interesting differences.

Players take turns rolling the dice beneath a cup and announcing a higher roll than the previous roll. This announcement can be challenged, with the roller losing a life if caught lying, and the challenger losing a life if the roller was truthful (players typically start with three lives). There is also the option (instead of rolling the dice oneself or challenging the previous roller) of passing your turn (without viewing the roll under the cup) to the next player. In this case the passer assumes responsibility for the roll as if he or she had rolled it him- or herself. (Thus, if the next player challenges the announced value, it is the passer who stands to lose a life if the value under the cup is not that which was announced.)