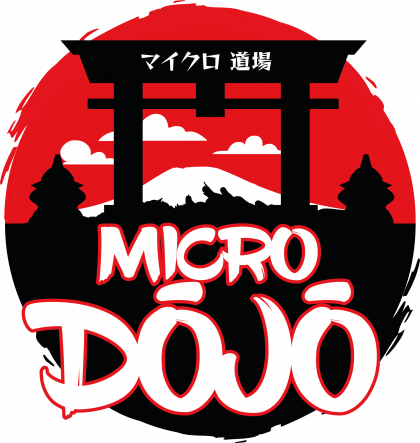 In Micro Dojo, you represent one of two Daimyos who have been tasked by the Shogun to bring prosperity to a small town. Carefully use the town&rsquo;s retainers to complete the Shogun&rsquo;s tasks and win favour. The most prosperous Daimyo will be granted the title to the town.&#10;&#10;Micro Dojo&nbsp;is a 20 min tactical euro game for two players, intended to fit comfortably in a pocket or purse. In Micro Dojo, players take control of the Ninja, Samurai, Sumo and Geisha meeples to generate resources, develop the town, and score points by achieving the Shogun&rsquo;s tasks.&#10;&#10;Each turn players move one of the four meeples to an adjacent space and take the action there - either gathering resources, taking a building, or activating a scoring objective. The catch? You can't move the last meeple either you or your opponent moved. The games end when the last objective is triggered, or a player reaches 7 points.&#10;&#10;Movement is tight, requiring you to second guess your opponents plan. Timing is crucial, triggering objective scoring only when it benefits you. Like a sparring match, every move should be chosen with precision and efficiency, or your opponent will strike.&#10;&#10;