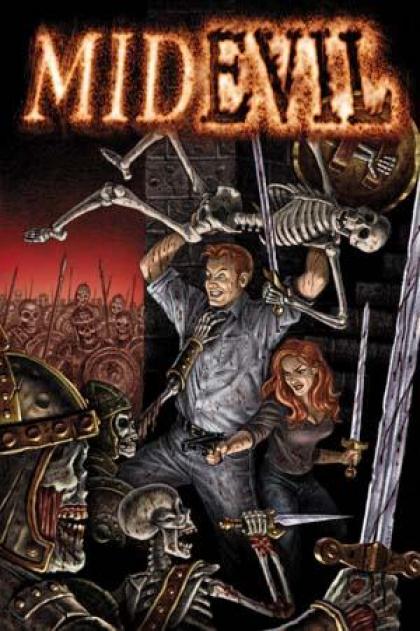 This is a standalone game and IS NOT compatible with the original Zombies!!! board game.

MidEvil is the first game to be based on, and an extension of, the award winning Zombies!!! system from Twilight Creations. Players have escaped the modern-day zombie hoard only to find themselves transported back in time and faced with a whole new set of problems!

Game play is fairly straightforward. Players start at the well and their objective is either to kill 25 points worth of skeletons or to collect the Necromicon from the graveyard and return with it to the Altar. The various skeletons are worth different points, White are worth 1, Red are worth 2, and Blue are worth 3.

Players start by drawing a tile and placing it on the board anywhere it will fit. They then place a number of skeletons and villagers as shown on the tile. They then roll a six-sided die (d6) for movement. Movement is orthogonal and limited to the tiles currently in play. If you encounter a villager you can collect it; skeletons you encounter must be overcome. At the end of your turn you again roll the d6 to move that many skeletons 1 space each.

Players can collect up to 5 villagers who can be sacrificed if they lose a fight. Combat is simple - enter a square with a skeleton and on a 4 or better on a d6, you win. If the roll is less than 4, you can either sacrifice a villager or pay skeletons to reach 4 or better. There is no change, so if you roll a 3 and only have reds, you now have a 5.

Some of the cards also require specific colors of skeletons be used in order to power them and many require that you kill skeletons in order to play them.

Once a player reaches the Graveyard and grabs the Necronomicon, the other players can attack him during their turns to try to steal it away from him. The game ends when someone takes the Necronomicon to the center tile of the Altar or collects 25 points worth of skeletons.

Part of the MidEvil/Zombies!!! series