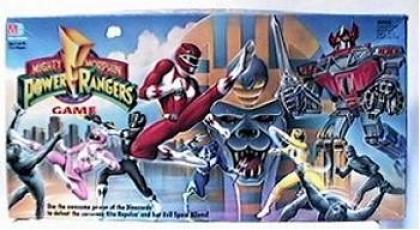 In this game, players assume the roles of Power Rangers on a 3-D gameboard. First, you must roll at least a "5" to turn into a Ranger. Then, you must defeat the Putty patrols on your path by rolling a number higher than the patrol's strength. Power Chips may be used to increase your die roll. Once all the Putties are defeated, you roll two dice to battle the Space Alien on your path. For the final battle, you roll three dice to attack King Sphinx. If all players have defeated all the Space Aliens, a Megazord is built allowing players to roll four dice in the final battle. The first player to defeat King Sphinx wins.