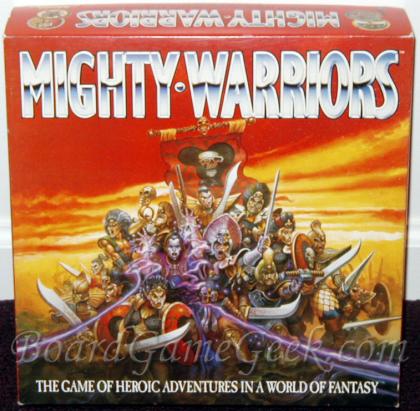 In Mighty Warriors, players choose from either a band of Heroes or Skaven Ratmen. The Heroes are led by a Noble Knight, a Fearless Dwarf, and a Heroic Elf while the Skaven Ratmen are led by a Chaos Wizard and four Skaven Champions. The Elf and Chaos Wizard can cast spells. The other characters have differing combat abilities.

Players set up the castle from modular floor tiles, which are then connected by stand-up doors. The players then position their forces throughout the rooms of the castle. Finally a “shield” for each side is placed.

The game is played in phases including Magic, Movement, Missile Combat, Melee Combat, and Recovery from Stuns. Each player attacks the other while moving from one room of the castle to another. A player wins by capturing the opponent’s shield.

This game is basically a “light” version of HeroQuest or Warhammer Quest, more of a skirmish style than exploration, Dungeon Crawl. The instructions state that the game is compatible with Ultra Marines so that players can have a fantasy versus science fiction battle.