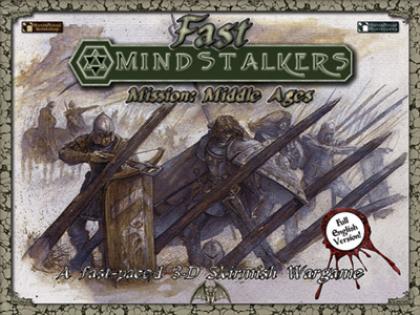 Mindstalkers is a skirmish wargame. The game starts in the distant future of mankind, but the actual action will be set in various historical ages.

The first line of miniatures and rule sets (in production right now and named "Mission: Middle Ages") regards the Italian Middle Ages (14th - 15th centuries). The following rule sets will be created according to the preferences of players themselves. New rules will be introduced for different historical ages: from the naval battles between pirates, to remote future wars, passing through barbarian invasions and the two World Wars... all will be possible!

The core rule set is based on fantasy/science fiction, but the game system allows the use of two different levels of rules.

The first one is purely historical, no fantasy or sci-fi elements, designed to play a true historical skirmish wargame: rules, equipment and characters are all strictly based on the referenced age. The second level provides special rules for fantasy elements (like psionic powers), according to the plot of Mindstalkers and adding unforeseeable features and fun to the skirmishes, but always keeping the fighting realism high.