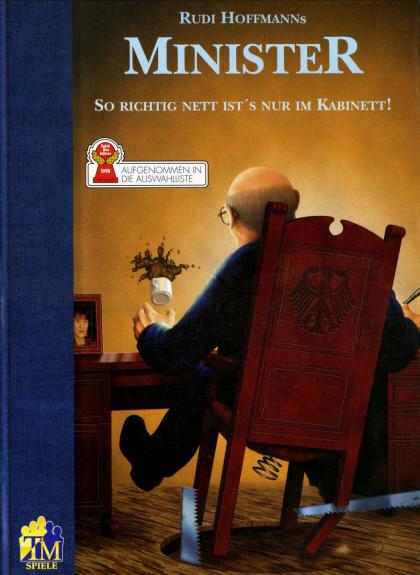 A dice driven game about German politics - players try to be the Chancellor when the game ends.
The board consists of a long movement track on which the players advance up the political ranks. Sections of the board have number combinations assigned to them (such as 1-2-3, for instance). Players roll a die and move one of their pawns forward to the best possible positions in the next rank ahead of them. Some fields allow for instant promotions or demotions of others, or for additional rolls. Other fields allow a player to add a minister to the current cabinet. The first player to control three ministers becomes chancellor, losing his/her post only when another player has more ministers. If all minister posts are taken, a player placing a minister removes another player's minister and takes his/her place.
Whenever a player cannot use his/her die result, s/he ages by one year. A player reaching the age of 65 is forced to retire from the game - when all players are retired, the player who holds the office of chancellor is the winner.