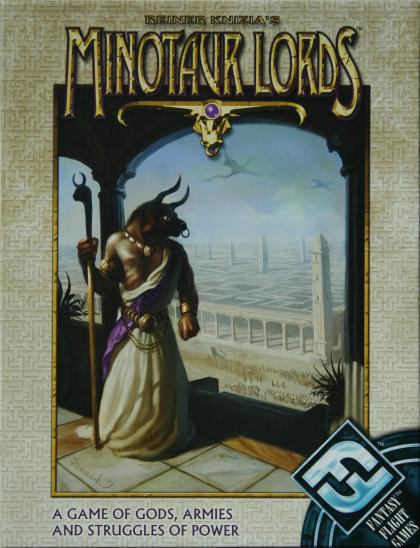 In this game, Minotaur Lords fight for control over the ancient isle of Cresos.

Cresos is divided in an upper and lower area. Each of these is further subdivided in economic, religious and military aspects which form the 6 columns over which players fight for control. On their turn, players play Minions, Buildings and Leaders cards in these columns. The player with the highest strength in a given column exercises supremacy over it and may use its special ability.

A player wins the game if he starts his turn and his opponent has no cards or if he has majority control over both the upper and lower areas. Majority is won by having more influence in a column than the other player and allows the use of special abilities.

From the fantasy flight "rant" page
Minotaur Lords is a sequel game to Scarab Lords. It is a stand-alone game, but if you have a copy of Scarab Lords, you can have your favorite Egyptian faction face off against one of the new factions from Minotaur Lords.