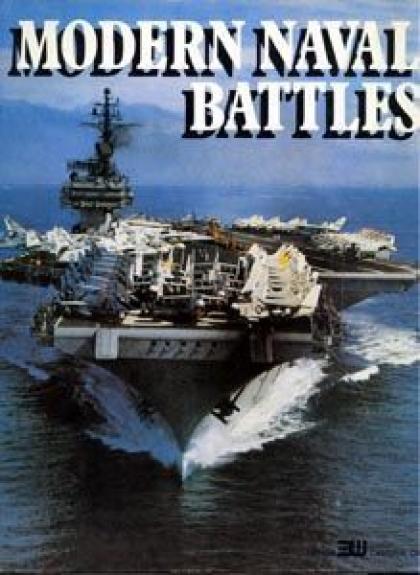 Modern Naval Battles is a novel card game for two to six players, based on present day sea power. The games is played in "rounds," with players taking turns to maneuver the ships in their fleets, attack opponent’s ships, and defend their own fleet against enemy attack. At the end of each round, players receive points for each enemy vessel they have sunk. The game can end when a player achieves a specific point total, or when all opposing fleets are sunk.
The game is of medium complexity. There are two expansion sets, Modern Naval Battles II: The Campaign Game and Modern Naval Battles III.

This game has been revised and renamed as Cold War Naval Battles and re-released (by the designers) in PDF format (free for personal, non-commercial use). The PDF files are available from:
http://relativerange.pancakeapps.com/Relative_Range/Cold_War...

Printed sets can also be purchased from the Relative Range site.

The re-release of the expanded game system, under a new name, probably deserves a separate entry into the BGG database.

A simpler version with a SciFi-theme is Star Force Terra #1: Contact!