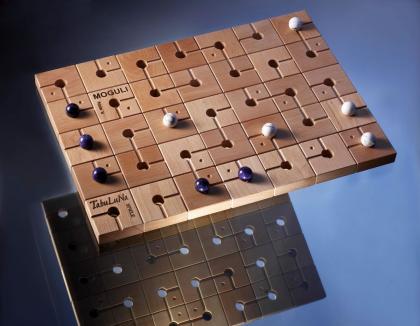 A 2 player abstract game using a board made from separate square tiles, with channels at right angles to control movement, on both sides of each tile. Players must get 4 of their 5 pieces across the board and can rotate a tile 90 degrees each turn. The trick in the game is that you can move on the paths over the tiles, then move on the paths underneath the tiles, then move again on the surface.

There are two kinds of tile. One tile has the right angle paths in the same place on both sides. The other tile has them on different places on each side. This works because you can tell by the markings which paths are on the underside without having to look. The board is set up randomly in a 5x7 grid.

When travelling underneath, you must travelling under at least one stone on the surface, of either player. If you do go under an opponent's stone, you are allowed a further tile rotation at the end of your move (a key bonus that gives you an edge). You are not allowed to move a tile that your opponent just turned, but otherwise you can rotate any tile at all.

The new edition by Abacus is in card, with little wood posts to help lift and turn the tiles. The first edition is a nice wooden edition, part of a range of games by the firm Clemens Gerhards.

Moguli seems like a brain-burner at first, but quickly the possibilities become obvious, and as only a few tiles move, you can read the paths on both sides very easily. You move from trying to figure the board, to trying to figure your opponent's options and how to exploit them. Moguli is a very interesting abstract that seems gimmicky at first, but soon becomes a clever challenge and very entertaining.