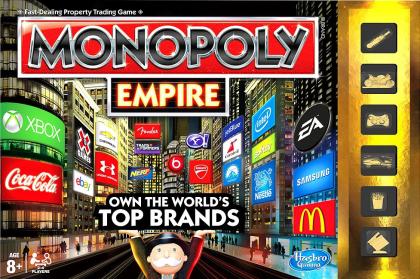 With Monopoly Empire, you can own some of the biggest brands in the world as every space on the game board is an iconic brand, including Xbox, Coca-Cola, McDonald's and Samsung.

As in the original Monopoly game, players start with cash in hand, roll dice, and move a token around the game board while hoping to purchase properties. Each property is represented by one or more billboards, with the more valuable properties having larger billboards. When you purchase a property, you place a billboard into your personal plastic tower; when you pass "Go!" on the game board, you earn income based on the height of your tower. Reach a value of $800 on your tower, and you win.

When you land on an opponent's property, you pay rent to that player based on the height of her tower. If you don't have enough cash on hand, hand over the top billboard in your tower instead but keep the cash you do have. This mechanism means there is no player elimination.

While players don't trade properties, you can effectively steal them through the use of Empire cards and the "swap" face on one die, which allows you to swap the top billboards on two towers.

To date, two editions have been released in the U.S.: The Second "Silver" Edition has some updated properties & movers from the First "Gold" Edition, but gameplay is the same for both editions.