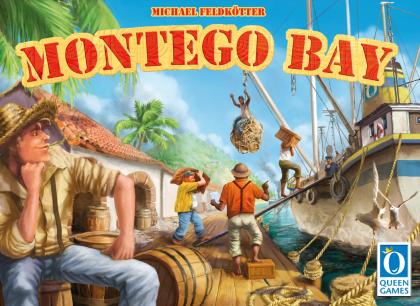 Players have to transport drums and load them on ships. For this, they have two workers, a large one and a smaller one, and a set of 5 cards for each worker to move them. There is a scale with counters (for each worker 1 counter) depicting which worker moves first, second and so on).

In a turn, all players secretly choose one of the numbered cards from each of their card sets.

For the worker which is the first to move, the player revealed the appropriate card and moves his worker the amount of spaces as stated by his card. When one of the workers land on an occupied space, the (passive) worker is pushed to the opposite side of the warehouse. When this place is already occupied the (passive) worker won't move. The (active) worker will be moved back to the next unoccupied place.
When all players have made their moves, the warehouses are checked if there is a worker next to a chamber. Players take as many drums in their colour as barrels in the room they are next to. The barrels are placed in one or more of the ships in the harbour (4 ships); players may decide freely.

When a worker is next to a room where broken barrels are, the player must take as many drums in his colour from any of the ships. When a worker is next to a room depicting also a silver coin, the player gets a silver piece from the common stock.
Majorities with barrels on ships are important for scoring points. When a ship is fully loaded, or if it is the leftmost ship, loaded or not, it gets scored at the end of the round after which it is taken away (barrels/drums goes back to the players stock); the other ships move left accordingly and a new ship is taken from a blind stack of ships tiles.
There are scores for first, second and third positions (the latter in a game of 3 or 4 players) on the ship.
For the next round the last worker (in play order) will become first worker (shifting the counter on the scale).

For three silver coins an extra worker for the current round can be bought, but this worker always must be the first to move in a round. This worker gets no penalty if his move ends near a room with broken barrels.

The configuration of the warehouse cards each game is different, as these are loose tiles. When the stack is depleted, the game ends.

Game Summary
The board shows a randomly ordered group of 7/8 (3er/4er) warehouses, each with 2 rooms containing 0-4 good barrels or 0-2 broken barrels, and 0-1 coin. This is surrounded by a looped movement path with stops in front of each storeroom. Players each have 2 dock workers (Big and Little) which start at opposite ends of the board (off the path initially), and 2 sets of movement cards numbered 1-5 (one set per worker). There are 4 piers, each with a random boat with room for 3 or more barrels. At the start, pier 1 has a "pilot" boat -- occupies space but cannot load goods. Finally, token movement order is set randomly at the beginning of the game: chits corresponding to all workers are placed in a row in random order.

Each round, players first have the option to pay 3 coins to hire Lazy Jack for this turn (if several want to hire him, priority goes to player with fewer VP). Place the Lazy Jack token with one of your workers. Then, everyone selects and simultaneously reveals a movement card for each worker. If you hired Lazy Jack, play an additional card of the same type (Big/Little) as whoever you placed Lazy Jack with. The workers than all move in token movement order, with Lazy Jack moving first. If they land on another worker, they shift that worker to the opposite side of the movement path, unless that space is already occupied; in that case, the moving worker moves backwards to the first empty space on the path.

After all tokens have moved, resolve the warehouses in order from one side of the board to the other. If a coin is present, take one from the bank. If there are good barrels in the storeroom, take as many from your stock and load them onto any boat(s). If you take the last open spot, score 1VP and the boat sails: players with barrels on board score VP based on majority (last place scores nothing; ties will score average of sum of ranks, rounding up). Immediately move other boats forward in the pier track, and place a new boat at the last pier. If there are broken barrels in the storeroom, remove as many of your barrels from the boats (exception: Lazy Jack does not unload).

If there are now 3 or fewer boats in the piers, the game will end -- score all boats and most VP wins.

If not, the boat at pier 1 scores, then sails away (immediately advance all boats and draw a new one). Finally, if you had dipped into the last 6 boats this turn, randomize the token movement order. Otherwise, the token last in movement order moves up to 1st position. Return Lazy Jack to supply, and start another round.