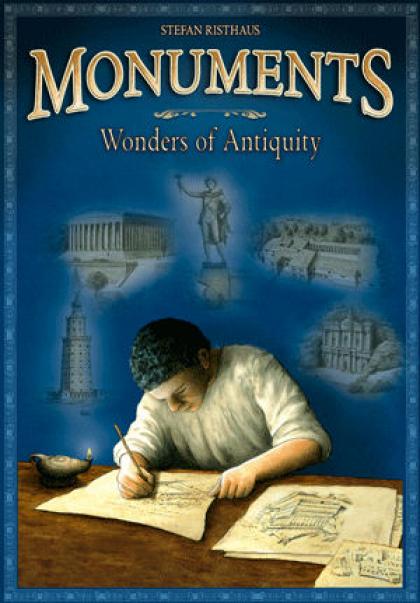 A game of building monuments and historical sources, reporting on these monuments.

In order to win the game, you not only have to build the monuments, you have to make sure that history will know them - and your fellow gamers will co-decide about it! And there are copyists, who will dispute the glory you've earned for your monuments...

The game shows monument cards with 12 types of ancient monuments like the Pyramids or the Colosseum (9 per type). The game is played in turns and usually you take a "monument turn," consisting of 3 actions allowing you to collect cards, to build monuments, and to expand your existing monuments. For example, it takes you one action per card to draw it either from the draw pile or the 3 faceup cards near it.

If you have some cards showing the same monument, you can use another action to erect this monument in your display. In case you are the first one to build this type of monument, you only need two cards - the second player building this same type of monument must have at least 3 cards. And no third player is allowed to build the same monument! Thus, playing your cards early makes it easier for you to erect the monument. But it saves you actions to collect some cards before displaying it, because regardless of the number of cards used, erecting one monument only counts as one single action.

Your monuments will receive their eternal fame only, if they are part of history. Each player has 2 (in a 3 player game: 3) historian tokens. In a historian turn, you have no monument action, but only write a history about all of your OPPONENTS' monuments (not your own ones!). Monuments get famous, and the owners receive victory points at the end of the game - the more often your monuments are in such histories, the more points you get. However, only interesting monuments of at least two cards are considered for a history, and by writing a history, the historian takes one card away (removes it from the game)! Thus the monument could be cut down to only one card during the game and will be not interesting to later historians any more. Why should I write a history and make the monuments of my opponents more worthy? If you do not use all of your historian tokens, you will be punished with 12 negative points at the end of the game! And you get additional victory points in the case that you write histories with a lot of monuments mentioned in it.

You should make your monuments interesting to historians again. During a monument turn, you may use one action (regardless of the number of cards played at the same time) to add cards to a monument that you have already erected.

In MONUMENTS, timing is important, and you have to decide what the best move to do now is: Should I wait for another Petra card, or shall I display the Petra Monument this turn? Is it advisable to make a historian turn now or is it better to choose a monument turn and draw the faceup cards, which I really need - taking the risk that I cannot write a history next turn and wind up getting negative points!

Finally, you have to consider that you are not sure about the victory points for your monuments. The points are related to the monument during the game, and if the Akropolis monument is worth 12 Points for example, you will only get 4 points if another player manages to erect an Akropolis monument that is greater than yours. This damn copyist will not only receive all your bad wishes, but 8 of the 12 Akropolis Victory Points - even in the case that his monument was not part of any history. Somehow you will feel that all the glory should be given to you alone!