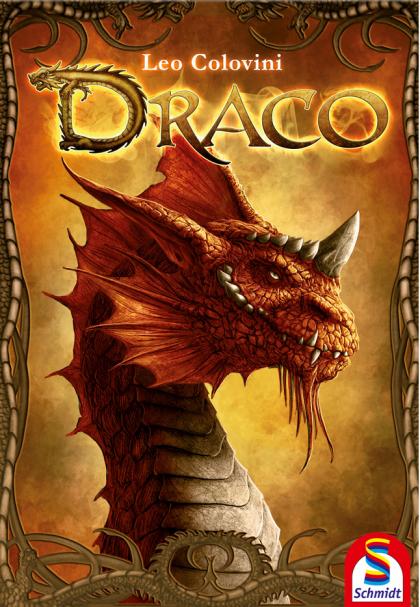 If you didn't know who designed Draco but were familiar with the works of designer Leo Colovini, you'd likely be able to recognize his style when hearing a description of the game.

Ten dragons start the game on the first square of a movement track, with each space on the track bearing a number from -2 to 8. Four blue and three green scoring spaces are scattered on the track, and four summit spaces are found at the end of the track. Each player is dealt a hand of six cards, with cards coming in ten colors to match those of the dragons; each player also starts with a uniquely-colored card face-up on the table to indicate which dragon the player is riding.

On a turn, a player lays down one card from his hand, then advances the appropriately-colored dragon as many spaces as the number shown on the card. If another player has a card of this color in front of her, the player places the card on that player's stack; if not, the player places the card on his own stack, effectively changing steeds if the color differs from what was on top previously. (Exception: If a dragon not being ridden by anyone is in last place, the player may choose to place the card under his stack instead of on top of it, while moving the dragon normally.)

If a dragon moves onto a blue space, then each dragon on a space valued three or less scores that many points for the player riding that dragon, if any. If a dragon moves onto a green space, then each player scores points equal to the value of the space on which his dragon stands. If a player causes no scoring on his turn or plays his last card in hand, he refills his hand to six cards; if he caused a scoring, then he draws no card and plays with a smaller hand next turn.

When a dragon moves onto one of the four summit spaces, all dragons score points (possibly negative) for their riders. Once three dragons have reached the summit, the game ends after a final scoring, and whoever has scored the most points wins.