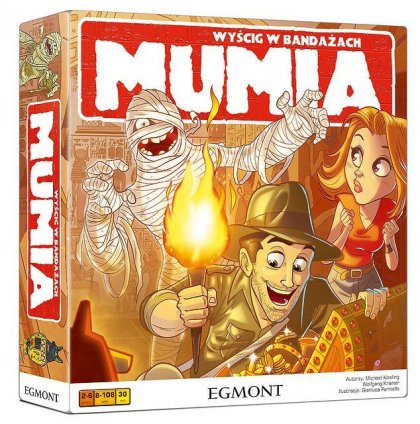 Mumia: Wy&#197;&#155;cig w banda&#197;&#188;ach (&quot;Mummy: The Race in Bandages&quot;) is a roll-and-move game in which players try to gather the most valuable tiles from the board. The tiles can be positive (+1 to +8) or negative (-1 to -10). There are also camel tiles which convert negative values into positive. The last pawn leaving the tile has to take the tile from which it leaves. Sometimes players may or have to move the mummy or guards which provide some meaningful choices to the game. At the end of the game the player with most points wins.&#10;&#10;The base variant may be also extended by four modular expansions included in the game box, which can be added separately or all in once.&#10;&#10;Mumia: Wy&#197;&#155;cig w banda&#197;&#188;ach is an extended version of Verflixxt! (&quot;That's Life&quot;) that contains the whole base game and most components from two expansions: Verflixxt nochmal and Verflixxt hoch 2. The first expansion is included almost 100%, but there are no pawns for 7th and 8th player. Apart from that, the whole Verflixxt nochmal is contained in this version. The second expansion is included partially with risk tiles, a happy green hat and a cursed red cap, but with no movement cards or finish-tile discs.&#10;&#10;