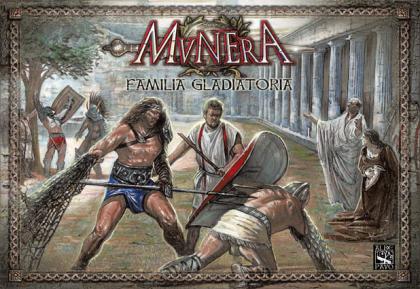 MUNERA: Familia Gladiatoria is a boardgame for 2-4 players in which you will play the role of a lanista, an ancient world entrepreneur who has decided to invest his wealth in the constitution of a Gymnasium of Gladiators with the aim of making it the most glorious of the Empire. You will recruit trainers, armourers, medics and even prostitutes. You will train free men, slaves, criminals and war prisoners to become gladiators and you will bring them to fight in the arenas throughout Italy. You will manage not only the duels, but the whole life of your gladiators: lead your champions to glory!

Unwinding of a game

In the first round, after a short preparation, the Players take their Gladiators to the arenas for brief introductory Shows: they approach the first challenges of their champions and place their bets on life or death of duelists. After this initial stage, the game takes on its regular sequence. In the first phase, called Forum phase, Players will play aggressive auction for what the market has to offer them: athletes for training and professionals for Gymansium’s management. In the second phase, called Munus phase, the Players play the Spectacles, trying to participate with their best Gladiators. Not all spectacles are equal: some have more money gain, others provide more glory. The Players need to make the best choices!

During the Spectacles, you will fight the duels of Gladiators. Just like a lanista of two thousand years ago, you will manage many duels and you will place bets and tampering to obtain money. Duel by duel, your Gladiators will grow and become stronger and more popular. Which Gym will be able to prevail and become the most glorious of the ancient world?

Familia Gladiatoria is the first in a series of games that aim to recreate the whole cruel and multiform world of Imperial Rome spectacles. The MUNERA series will allow you to live not only the training of Gladiators and their challenges, but also the hunts in the arena and the chariots in the Circus Maximus.