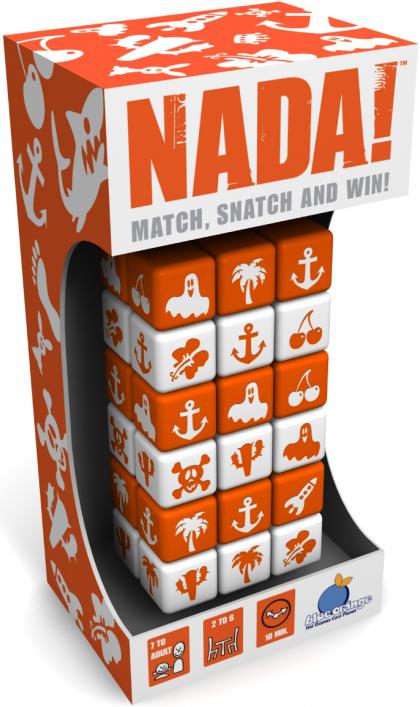 In Nada!, you want to claim as many matching dice as possible – until no matching dice remain, that is, at which point you can yell "Nada!" to claim what's left.

In each round, you start by taking six white dice and six orange dice, with each die having six different symbols on it. Someone rolls all the dice in the center of the table, then players race to be the first to yell out a symbol that is on at least one white and one orange die. If correct, the player collects all the dice showing this symbol; if not, the player collects nothing and sits out the next turn. Once a player has claimed dice, this player rerolls all the remaining dice. If no match can be found, the first player to yell "Nada!" and cover the dice with her hand claims all the remaining dice. Players tally their scores – one point for each die collected – then play another round. Whoever has the highest score after three rounds wins!

Nada! includes variant rules for two other games. In one, the players use all 36 dice at once, playing as above but most likely scoring more points each time since more dice will be in play. The round ends after all dice of one color have been claimed, and the player who collects the most dice wins.

In the other variant, players start the game by secretly drawing 8, 12 or 16 dice from the bag (with the number based on the number of players). On a turn, each player chooses 2-4 dice from his stock, then all players roll their dice simultaneously, claiming dice as explained above. The players take back any unclaimed dice, then choose 2-4 dice again for the next turn. Once a player has no more dice in hand, the game ends, and the player who has collected the most dice wins.