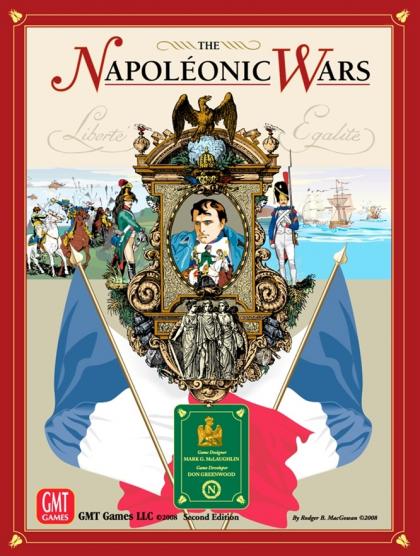 "The Napoleonic Wars, 1805 - 1815, brings you a fast-paced, tension-filled, card-driven wargame using a point-to-point movement system that pushes the envelope in a new direction for this pivotal period of history. Having a simple-to-learn strategic system and short rulebook, The Napoleonic Wars, can be played in an evening as the cards and Diplomatic Track make for tough decision-making in the face of everchanging enemy threats.

Set in 1805 Europe, you must weigh the strategic dilemmas facing the two alliances in mortal conflict. Napoleon's France enjoys a superb army, central position, superior leadership, and a useful, if not powerful, ally in Spain. However, she faces three foes.

Napoleon must beware of Britain's seapower and wealth, Austria's threatening position, and Russia's reinforcing hordes. In the wings, Prussia, Turkey, and Sweden teeter on the brink of war, begging inducements to join either side. Even lowly Denmark's fleet can upset the balance of power.

When fleets or armies collide, battle-related cards may be played and then dice are rolled to resolve the battle and inflict casualties. Even the most brilliant maneuver faces the chance of floundering. So play The Napoleonic Wars now, and put the strategist in you to the test. Your options are only limited by your vision, a meddlesome enemy's cards, and the hand of fate."