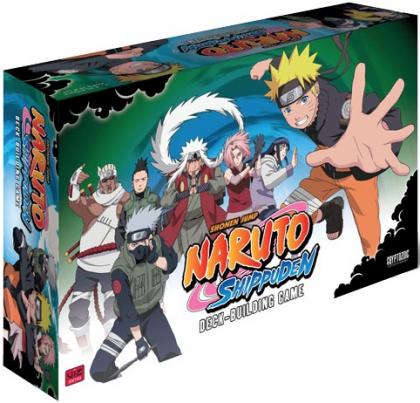 In the Naruto Shippuden Deck-Building Game, you play as Naruto or one of his comrades and confront S-rank criminals such as Orochimaru and members of the Akatsuki as you explore distant lands on your path to becoming the greatest ninja ever! While you begin with only basic abilities, you'll gain allies, earn equipment, build chakra, and master new powerful techniques, with the goal of defeating as many Archenemies as you can.

Naruto Shippuden Deck-Building Game uses Cryptozoic' "Cerebus" deck-building game engine, in which players use Power as the currency to acquire or defeat available cards, but it also introduces Chakra, a new source of energy for your character and many of the cards you play. Will you focus your deck-building on maximizing your Chakra points? Will you try out new innovations in the game such as positive attacks and cards that give you a bonus as soon as you buy them?