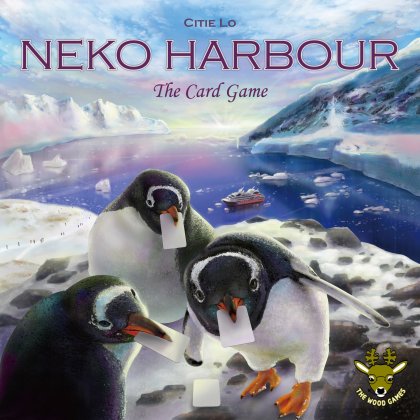 You have arrived at Neko Harbour and are planning to travel around the Antarctic Peninsula to see different kinds of penguins &mdash; and perhaps other creatures as well. Travel in the Antarctic is not easy, however, and for some trips, you even need a license to get in.&#10;&#10;Neko Harbour: The Card Game is a strategy card game for 2-4 players. Each game lasts two periods, and each period comes with a mid-game scoring. Each period consists of two phases: the drafting phase and the action phase.&#10;&#10;During the drafting phase, players take cards from the display until they have six cards in hand.&#10;&#10;During the action phase, players take turns playing a card from hand to build a preparation line until all cards have been played. With these cards, players can get resources, move ships, trigger special actions, and (probably) take free actions.&#10;&#10;The most intriguing part of the game is that players need to build the preparation line with cards and create ideal combinations between the cards as cards create a hub that provides players with a bonus when ships arrive at it. Additionally, players should acquire enough licences for their journey to go smoothly. After two periods, the player who has the most penguin points wins and is clearly the one who saw the most penguins in the Antarctic.&#10;&#10;&mdash;description from the designer&#10;&#10;