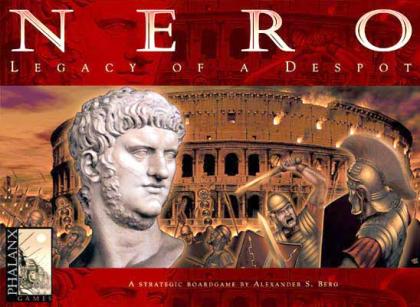 "In Nero: Legacy of a Despot, the players are contenders for Imperial power. Using legions and political influence, the aim is to either seize and hold the Imperium by being declared Emperor, or to gather enough land and power so that, at game’s end, they are in position to do so.

Nero is a game full of opportunities. The players have to react and act quickly, often making their own opportunities by playing the Event cards sagaciously and timely. Event cards include Assassins, Briberies, Bad Auguries, German Tribe Attacks, Galley Fleets, Crisis in Roma, the Praetorian Guard and many more.

Nero: Legacy of a Despot includes one large gameboard of Europe and the Mediterranean area, 162 full color playing pieces, 12 full color cardboard stand up leader pieces, 55 quality playing cards, two player aid cards and a rules booklet. The game does not contain any dice – movement, combat and events are all covered by the deck of playing cards. "