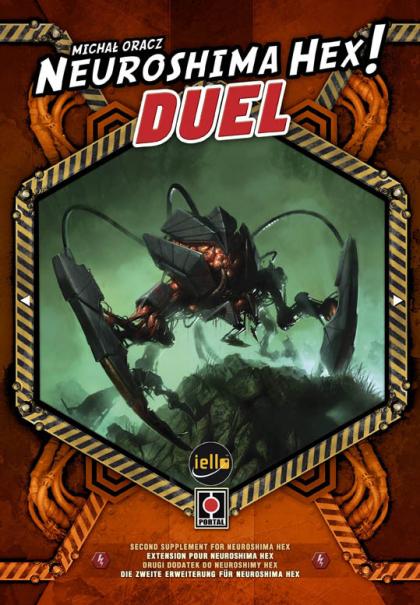 Duel is the second expansion to the game Neuroshima HEX. Just as the first line of supplements, Duel includes two new armies, and something special - this time it is intended to be a unique board games for two players. Duel is both an expansion and a stand-alone game - the game does not need base Neuroshima HEX to play.

The first army in the expansion is Vegas, an army of people who grew up in gambling. Its special feature is the ability to control the enemy of man and machine by means of special units - agitators. They can bribe any enemy unit that is adjacent to Vegas's HQ to make it attack another unit. If your units attack Vegas HQ, you can not be sure when they will stop attacking Vegas and turn to attack you!

The other army is a SMART, spreading fear the army of half machines, half-mutants, the experimental hybrids are transported in sealed combat transporters to battlefield where they emerge and destroy everything that moves. These are an extremely deadly force. Every ally adjacent to Smart's HQ has the ability to move. It makes this army very flexible and dangerous.