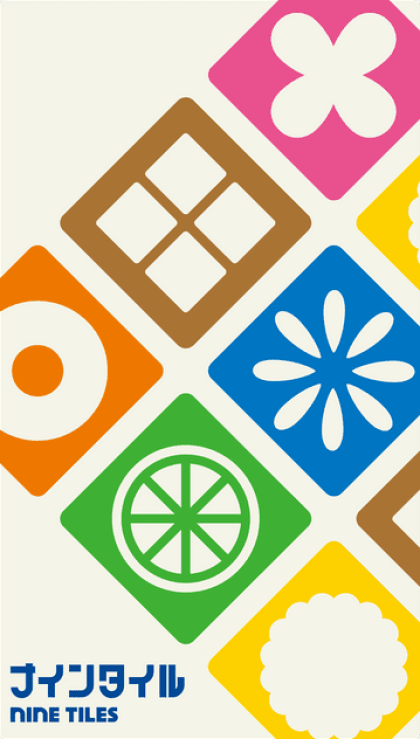 In Nine Tiles, each player takes nine double-sided tiles, with each side of a tile having one of six images, and arranges them in a 3x3 gird. Each image appears a total of three times on the tiles, with it being paired with a different image in each of the three instances. (The sets of nine tiles are identical, and they have 1-4 dots on them to help players sort the tiles.)&#10;&#10;Each round, one of the thirty goal cards is revealed, then players race to rearrange their tiles &mdash; flipping one tile at a time, or swapping two tiles &mdash; in order to make their nine tiles match the image shown on the card. Whenever a player thinks they've done this, they slap the card. If they're correct, they keep the card; if they're wrong, they still keep the card, but flipped face-down. If a player collect two face-down cards, they're out of the game.&#10;&#10;The first play to collect four (face-up) cards wins!&#10;&#10;By combining two sets of Nine Tiles, up to eight players can compete at once. When more than four people are in a game, reveal two of the thirty cards each round. Each player can claim at most one card in a round.&#10;&#10;