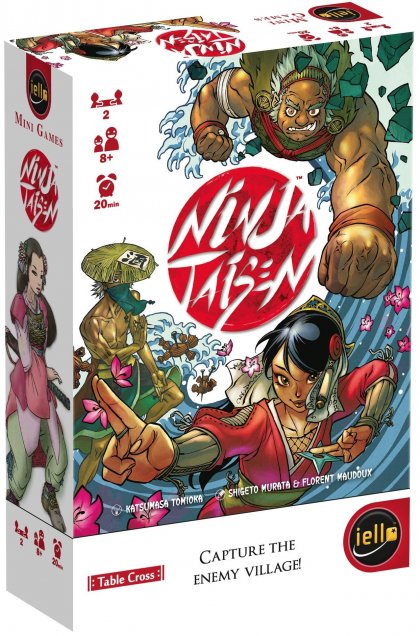 Ninja Taisen is a two-player, dice-driven open information abstract game with a random set-up. Both players have identical sets of ten fighters, with three fighters in each of three colors with values 1&ndash;3 along with a tri-colored boss valued at 4; these fighters are placed in small stacks of varying size onto a line that's eleven steps long. On a player's turn, he rolls the three colored dice and can make up to three moves accordingly, with the blue die moving a blue fighter, etc. Moving a fighter that has other fighters on top of him moves these other fighters as well.&#10;&#10;If, as a result of movement, his fighter (or stack of fighters) encounters an enemy, a fight between the two top cards in each stack occurs, the result of which is decided primarily by the color (via a rock-paper-scissors mechanism) and secondarily by the number (highest wins). If the boss wins a fight, its power is reduced by the enemy's power for the remainder of the current fight; if two fighters draw, they both retreat one step toward their own village, possibly precipitating other fights on the same turn. The fight continues until either pile is depleted.&#10;&#10;The first player to either defeat all of the opposing fighters or reach the end of the line (and clear out the opponent's fighters in his village) wins.&#10;&#10;