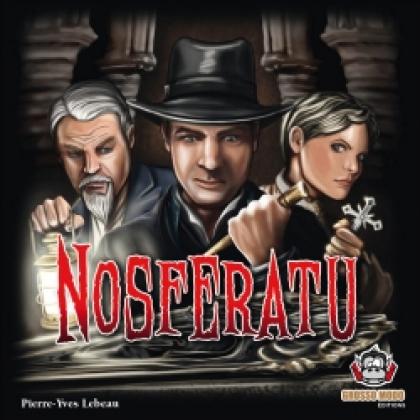 In 1887, a vampire wakes up and seeks to quench his thirst for blood. Brave men and women ally to destroy him – but to do so, they will have to thwart the plot of Renfield, his faithful servant.

Nosferatu is a card game mixing tactics, bluffing, and team play, with the vampire and Renfield facing off against the vampire hunters. At the start of the game, everyone knows who Renfeld is, and Renfield knows which of the hunters is actually a vampire (as he chooses how to distribute the character cards), but the vampire's identity is hidden from everyone else. The hunters must identify the vampire and kill him with the ancestral stake before he can play five bite cards; if the hunters accidentally stake one of their own, then demoralized and weakened they lose the game.

Each player other than Renfield starts with two cards from the library, which is comprised of rumors, incantations, bites and night cards. Five ritual cards – silver mirror, 2x blood transfusion, holy water and time distortion – are placed face-up on the table. Renfield creates a "clock" by taking one night card for each player and shuffling it with a dawn card.

The game lasts a number of rounds, with the rounds continuing until one of the winning conditions is met. At the start of a round, players take turns doing the following: Drawing two cards from the library, discarding one card face-up, placing one card face-down in an action pile, then drawing a card from the clock. As soon as a player draws the dawn card or each player has played once, this part of the round ends.

Renfield shuffles all the cards in the action pile, then reveals them. If the pile contains only incantations, the player holding the stake chooses one of the rituals, takes its action, then turns the ritual face-down. Once all five rituals have been used, the hunters win the game, but their main goal is to kill the vampire. If the deck contains bite cards, then Renfield applies the bites to the hunters, with a hunter losing one card in his stock for each bite; a hunter can have at most two bites. Night cards in the pile are added to the clock, thereby giving the vampire more time to work in future rounds, while making it tougher for players to achieve rituals.

If the dawn card was revealed, the holder of the ancient stake can stab someone, thereby ending the game with victory for one side or the other, or pass the stake to another player. (If dawn didn't break, then the stake passes to another player with no opportunity for stabbing.)