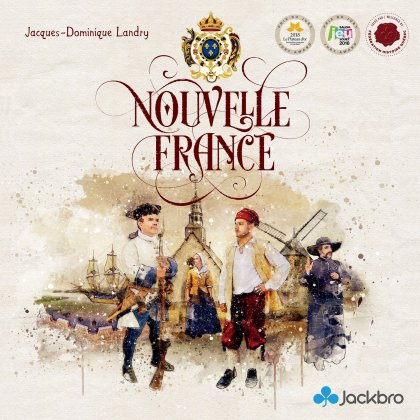 Main aim&#10;A strategy game where you need to skillfully place construction blocks to build three historic sites from the Nouvelle France era, outwit your opponents, and thereby gain points. Add to that three further ways of either bettering your score or hindering your opponents.&#10;&#10;Concept and Goal of the Game&#10;Each turn, carefully place a construction block to help build either the military redoubt, the church, or the seigneurial mill. At the end of each turn, players gain points based on the placement of these blocks. Three times during the game, it will snow and this is when players receive extra points based on the number of cubes of their colour present in the level being tallied up. The snowdrifts are then added to each building, fitting around and hiding the level that has just been tallied, therefore limiting the remaining space available to gain points. The player who has the most points at the end of the game is the winner.&#10;&#10;Playing the Game&#10;Each turn, a player draws a card illustrating a type of construction block, taking the one indicated from the stock pile. They need to add the block to one of the buildings in line with the rules of play: a wall must not be more than 3 cubes high; blocks must be within limits shown on the foundation tiles; blocks must not be inserted underneath another one already in play etc. Once the block has been placed, one point is awarded for each newly added cube of the player&rsquo;s colour, with further points being added for all the cubes already in play of the same color that this new block touches. Therefore, players should try to have as many of the cubes already in play of their colour touching those of corresponding colour in the newly placed block to maximize their score per turn. Also, strategically played ally cards and colourless blocks allow players to increase their scores.&#10;When a snowflake card is drawn from the construction-block deck, the game stops, and points are awarded to each player based on the number of cubes of their colour found in the level being tallied. The snowdrifts are then added. This happens three times during the game. When the first snowflake card is drawn, points are tallied for the first level of each of the three construction sites. When the second snowflake card is drawn, points are tallied for the second level. Finally, when the third snowflake is drawn the tally is done for the third and final level, and the game ends. The tally sticks placed next to each building indicate how points are attributed each level. On the tally sticks there are +, - and x 2 symbols indicating how many points players win or lose based on the number of cubes of their colour in the level being tallied.&#10;&#10;End of the Game &#10;The game ends when the third snow flake is turned over. Points are tallied for a final time for the third floor of each construction site. The player having the most points on the points&rsquo; board is declared the winner and earns the title of Royal Engineer for New France.&#10;&#10;