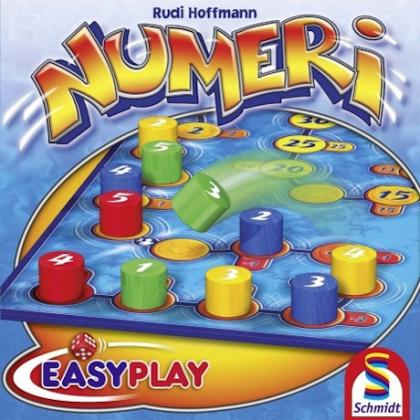 Each player receives five figures of the same color, numbered from 1 to 5. A player rolls the dice and then may move figures that correspond to the total of the dice, e.g. rolling a 5 allows a player to move the 5 piece, or the 2 and the 3. The pieces are always moved to the next free space that is available on the board.
If the player succeeds in making a chain of 3 or more pawns, he or she may roll the dice again.
The game is finished when the last three, specially-marked squares are occupied. Each player receives the number of points achieved by multiplying the number of the square by the number of the occupying pawn.

* roll d6; may move your matching-numbered token (* is wild but moves only one token)
* move it to the next free space on the track
* after any player's token has crossed a line (varies with number of players playing), rolls of 3 4 or 5 may be split between 2 of your tokens (3->1-2, 4->1-3, 5->1-4 or 2-3), but only if you can move both the other tokens
* if, with your move, you create 3 adjacent tokens of your color, go again (may do it repeatedly)
* game ends when last 3 spaces of the track are occupied
* final scores (for each token):
o (token number) x (number on that token's space)
o the multiplier for tokens never played to the board is -5
o highest sum wins

The original version of the same-named game provided players with six tokens, and had different rules for gaining points from the board spaces.