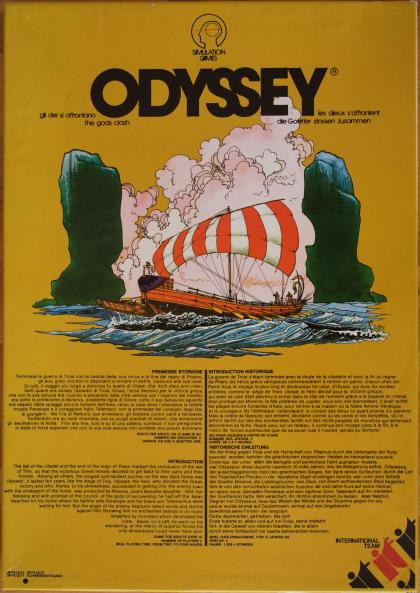 Massive board shows Ulysses' voyage from Troy to Ithaca.

Players take on the roles of Minerva (helping him) or Neptune (hampering him). The latter secretes 8 perils about the Mediterranean. Then Minerva's wind blows the fleet of six ships from the shores of Troy. The fleet is driven hither and yon by the players' competing winds. There can even be Billiard-style caroms on the board edges. Perils are resolved by each player rolling a die. A victory by Neptune sinks a ship. Six sinkings reduces Ulysses to his raft, with which he can still hope to make the Ithacan strand.

Rated by the publisher as difficulty 1, i.e. least difficult.

Rules in Italian, English, French and German. The Italian version may less ambiguous than the others.

Capsule-reviewed by Sid Sackson in Strategy & Tactics no. 83 (The Kaiser's Battle).