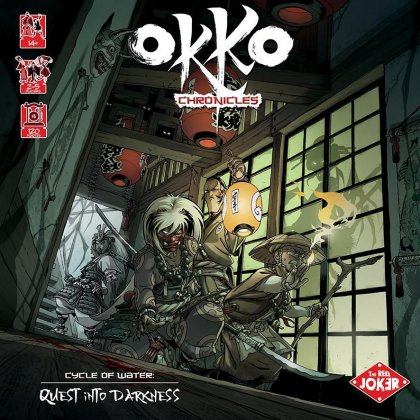 Everyone who has read the comic books or has played the board game by Hazgaard Editions will be really excited with this one! The Red Joker brings OKKO and his party once again on our tables! The game will be included in the company&rsquo;s Chronicles series and it will be an entirely standalone game. Although this addition to the series will have many differences to its ancestors, those who are familiar with Guardians Chronicles, will get into this game in no time, as the basic rules will be quite similar to it. If you haven&rsquo;t heard of this great story, its time to find out about OKKO&rsquo;s incredible universe!&#10;&#10;OKKO is a demon hunter along with his companions Noburo, Noshin and Tikku he wanders the lands of the Pajan Empire. Noburo is the most faithfull companion of Okko. He is a Hanyo (half man &ndash; half demon) who hides himself behind a red mask. Noshin is a monk who can communicate with the Kamis and has a special preference for&hellip; sak&eacute;! Tikku is a young fisherman (at that time) who wishes to become a monk by the guidance of Noshin. The four of them are on a mission after Tikku&rsquo;s request to help him find his kidnapped sister. This quest will lead the four of them to situations and places far from what they had ever imagined&hellip;&#10;&#10;The Heroes in OKKO Chronicles will have a character card with characteristics and talents. They will also come with Power Cards which will represent the Hero&rsquo;s special abilities, secret techniques and other unique skills.&#10;&#10;This latest addition to the Chronicles family will plunge you into the heart of a dark and fantastic incarnation of medieval Japan. Journey to the four corners of the war-torn kingdom of Pajan as you join the ronin monster-slayer, Okko, and his brave companions as they hunt down a variety of fearsome supernatural foes.&#10;&#10;Whether you choose to harness the devastating power of fickle Elementals or rely on the cold surety of ancestral steel; you must combine your martial prowess with all your cunning if you are to uncover and destroy the demon in your midst.&#10;&#10;Developed from those used for Guardians' Chronicles, OKKO&rsquo;S CHRONICLES introduces completely new mechanics. Still easy to learn and fun to play, these rules have their own unique flavor and specific features that allow you to become totally immersed in this fascinating universe. These developments include:&#10;&#10;&#10; Weapon, Armor and Item cards with which to equip your Heroes, allowing you to tailor them to the situations they face.&#10; A unique investigation system to enable the Heroes to unmask the terrible Oni hidden among the occupants of the daimyo&rsquo;s palace.&#10;&#10;&#10;