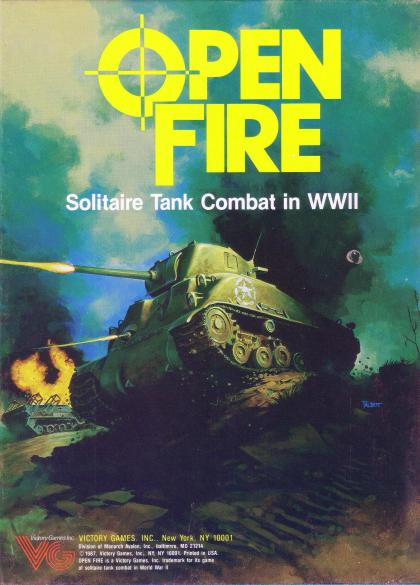 Open Fire is the solitaire game of combat, adventure, and heroism for everyone who ever wondered what World War II armored combat must have been like. Inspired by the award-winning Ambush! solitaire game system, Open Fire provides the player with a platoon of American armor, faced with a variety of missions against an ever-changing German foe. The variable events, innumerable tactical options, and wealth of unexpected occurrences make Open Fire a game unlike any tactical armor game you have ever played before. The easily learned rules are designed to get the player into action quickly, selecting his platoon and vehicles and providing each unit with command and initiative ratings, perception, weapon skill, driving skill, and movement capability. After selecting one of the six missions provided, you will send your platoon into operations, where your vehicle will move as you wish... until the sequenced action rounds are triggered by the shriek of an incoming 88mm anti-tank shell, and then the fun begins.