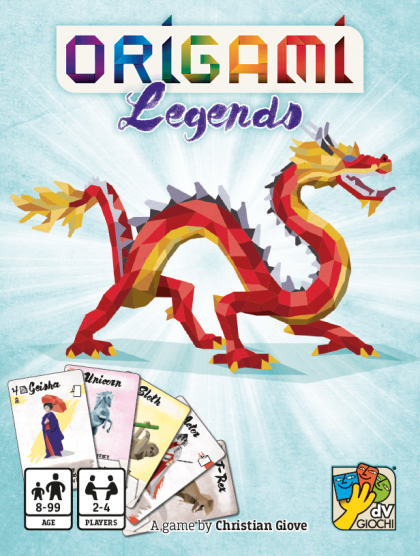 The greatest origami masters face off for the title, using their magic to make origami creations come to life! Can your knowledge of the art of folding paper impress the judges and earn you the title of &quot;Best Origami Artist&quot;?&#10;&#10;Origami: Legends is a fast, fun card game for everyone! During the game, you collect folds to play origami cards, scoring additional points when you use special abilities. The game includes four animal card families: polar animals, exotic animals, dinosaurs, and legendary creatures. The game also includes twenty new character cards. When a player puts a character into play, they can choose one origami from the draw line and play it without paying its cost with folds as a bonus action &mdash; but as long as the character is in play, it modifies the rules of the game for all players.&#10;&#10;Origami: Legends can be played on its own, or the card families can be mixed and matched with those in the original Origami card game.&#10;&#10;