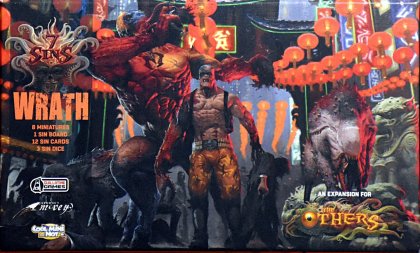 The Others: 7 Sins – Wrath Expansion

The Wrath Expansion box comes with Avatar, Controller, 6 Abominations, Sin board and 12 sin cards.&#10;&#10;The Others: 7 Sins is a horror board game for 2 to 5 players. One player controls one of the 7 Deadly Sins, employing monstrous incarnations of these corruptive forces in an attempt to consume the world and bring about the apocalypse. The rest of the players cooperate as heroes of the F.A.I.T.H. organization who will attempt to fight back the invasion!&#10;&#10;The Sins player, on the other hand, has access to the different monsters of each Sin, including Abominations, a Controller, and the terrifying Avatar of Sin! These monsters can attempt to destroy the heroes, or simply hinder their progress on their missions.&#10;&#10;Each Sin provides the Sins Player with a different deck of Sins cards that can be played at different times to surprise players with different effects, often tied to the strategy of each Sin. Yes, because each Sin taints the game with an overarching mechanic that is always in effect.&#10;&#10;