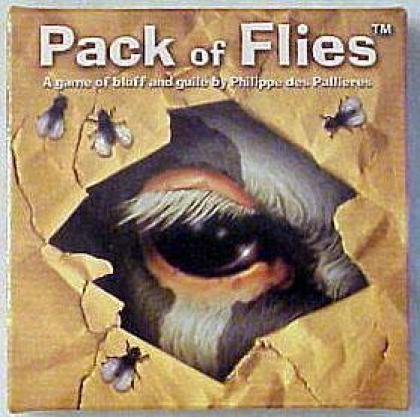 12 cards (with positive, negative, and special powers) are revealed one after the other. Each time a card is revealed, the players try to acquire it by secretly choosing a number of flies(each player starts with 5 black plastic flies), and guessing the total number of flies chosen by all of the players. The used flies become the reserve in the middle of the table.

The player who guessed the correct number(or closest guess) gets the card and either keeps it, if it's a positive card, or gives it to another player, if it's a negative card.

There are 3 special power cards, Mireille, the (blue) Trained fly, who can be called back from the total, Insecticide which can eliminate the flies from opponents hands, and Fly Babies which allows players to take flies from the reserve.

If a player guesses the exact number of flies chosen by the group in a round, they get to take one fly from the reserve.

After all 12 cards have been acquired/distributed, the point values on the cards are totaled and added to the remaining flies a player possesses. The player with the most points at the end of the game will be the winner.