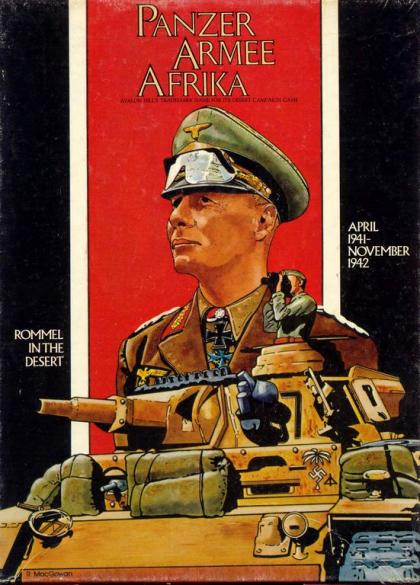 Panzer Armee Afrika: Rommel in the Desert, April 1941 - November 1942, is a simulation of the North African Campaign between April 1941 and November 1942. Battalion, Regiment and Brigade-sized units represent the actual forces which took part in the fighting. Included in the game is a Variable Orders-of-Battle Chart that offers variations in forces to demonstrate how history might have been different.

The game spans the entire 20-month campaign, allowing players to recreate the famous battles of the period between the British-led Commonwealth forces and the Axis forces of Germany and Italy, to include Rommel's Panzer Army Africa. Set at an operational level, players must manage their military forces and precious supplies better than their opponent to achieve victory. The Axis aims at capturing Alexandria, the key to the Suez Canal. The British player has to prevent all this.

When originally published by Simulations Publications, Incorporated (SPI) within the pages of Strategy and Tactics magazine, it was meant to be a very different treatment of a subject made familiar to wargamers in the Avalon Hill Game Company's Afrika Korps (1964). Different it indeed was, introducing a number of novel twists to what seemed to otherwise be a very traditional-style hex-and-counter wargame. It became a classic in its own right alongside Afrika Korps; Avalon Hill republished Panzer Armee Afrika in a second edition.