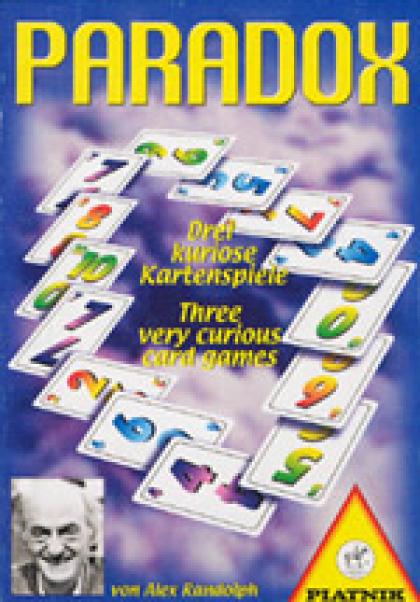 Paradox is a deck of 44 cards in four suits of face value 0 to 10. There are three games that can be played: Costly Tricks for 2 players, Buddy On Your Left for three players and The Third Man for four players.

Costly Tricks: a trick-taking game for 2 players in which you must pay for your tricks!
The players see the entire deck after it has been dealt out to themselves and their "invisible partners". They take turns playing cards for themselves and their partners with trump shifting when they cannot follow suit. Cards are worth their face value (0 to 10), but tricks cost 20 points! Thus they want to take the valuable tricks and make their opponent take the costly tricks.

Buddy on your Left: a game for 3 players where each player's score is his own plus that of his left hand neighbor!
A card is led then players in turn play cards either higher or lower than the lead card. As long as the played cards are lower, the pile continues to grow. As soon as a card higher in value than the initial card is played, that player sweeps the entire pile. Cards from 1 to 6 score their value, 7 to 10 are worth nothing. After the last card is played, you score for the cards you collected plus the cards your left hand opponent collected. Highest score wins.