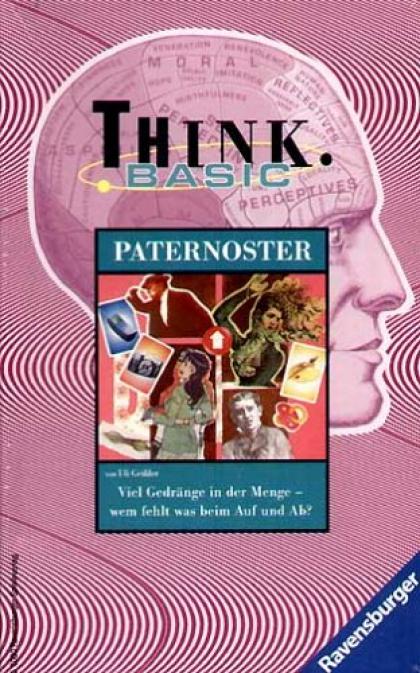 A paternoster is a type of elevator that has no doors, you simply step onto a narrow platform on a continuously rotating belt. Apparently they were common on the Continent and are still used in places where lift doors would be unsafe, such as nuclear power stations. Anyway, this game has 9 thick cards showing various odd looking passengers going up or down in the lift, with some only partially shown. Each player has a deck of cards showing the same people, in different poses. The cabin cards are shuffled and laid out face-down in two columns of 5, with a gap and a pawn is placed next to the gap. First player to grab the die rolls it and moves the pawn clockwise to face a cabin. Players call out which person they think is in the cabin and the cabin card is turned up. If you're correct, you dump the matching card from your hand; if not, you keep it. But the cabin card is replaced face-down in the original empty space, not where it was previously. In this way, the cabin cards will be moved around as you play, and you'll have to use your memory to clear your hand to win.
There are also tempo chips you can draw for correctly guessing a card you've already dumped. You can use the chips to move the pawn fore or back from the numbered rolled (so it goes to a cabin you remember and want to dump). But get it wrong and you pick the card back to your hand.
A surprisingly hard memory game but still lots of fun. Published as Comings & Goings in the UK and Vanished in the US, it is now in print as Think: Paternoster by Ravensburger, with the player's cards being simply objects held by the people, like a Handy (that's German for mobile phone).