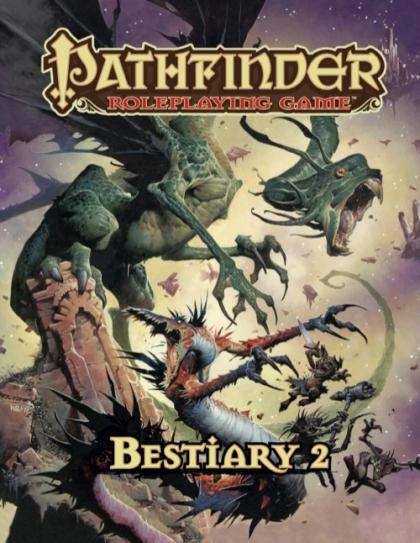 Go beyond goblins with an army of fantasy’s most fearsome foes! Bestiary 2 presents hundreds of different creatures for use in the Pathfinder Roleplaying Game. Within this collection of creatures you’ll find undead dragons and mischievous gremlins, shrieking banshees and unstoppable titans, the infamous jabberwock, and so much more! Yet not all these monsters need to be foes, as new breeds of otherworldly guardians, living shadows, and vampires all might take up adventure’s call. In addition, new rules for customizing and advancing monsters and an expanded glossary of creature abilities ensure that you’ll be prepared to challenge your heroes wherever adventure takes them!

More than 300 different monsters
Creatures both new and familiar, drawing upon the best-known beasts of legend, literature, and Pathfinder RPG adventures
Challenges for any adventure and every level of play
Hosts of new templates and variants, including simple templates for on-the-fly creature customization
Numerous lists of monsters to aid in navigation, including lists by Challenge Rating, monster type, and habitat
New rules for creating and running high-level menaces
Expanded universal monster rules to simplify special attacks, defenses, and qualities
New familiars, animal companions, and other allies
And MUCH, MUCH MORE!