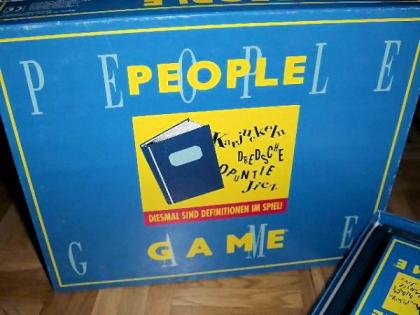 Despite its English name People Game is a German Word Game for at least 2 players or teams.

The cards show each uncommon or unusual German words with their explanation or definition. A sand timer of about 3 mins running time allows the players to do the following:
They read one term and the definition and are allowed to write two definitions of their own. When the time is up then they offer between 3 and 5 points to their adversaries. They read those 3 definitions and have to guess which one is correct.
If they get it right it's them who advance on the track otherwise it's the active players.
This continues until one team reaches the end of the track.

The game consists of the board, 420 cards, 8 standard pawns, 1 pad, 4 pencils, the sand timer and of course the rules.