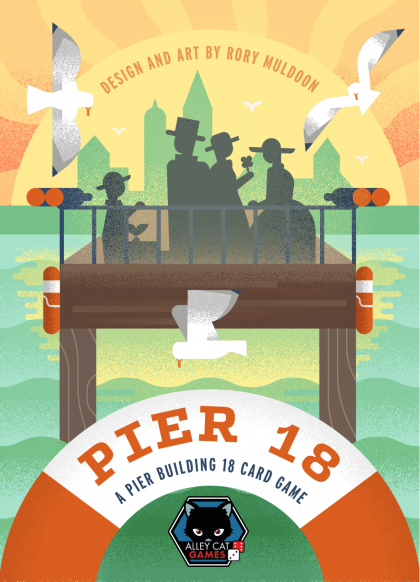 In Pier 18, you take on the role of a Victorian pier builder as you compete to create the country&rsquo;s greatest seaside pier. Using only 18 cards, you&rsquo;ll draft and position sections of pier, building your unique structure outwards to sea in an effort to score the most victory points.&#10;&#10;During a player's turn they will draft one of the cards from the centre of the table and add this to their pier. This will make their pier larger but depending on how they place it can score them more or less points. The game ends when there are no cards left to draft and players tally up their in game (scoring the highest of that patron that round) and end gamepoints (a&#10;total of all icons scored) to determine who is the winner.&#10;&#10;Victory points are earned by meeting the needs of pier visitors and workers, as well as satisfying the demands of powerful patrons, who&rsquo;ll lend their support to one pier at the end of every round. You also choose a personal goal that you&rsquo;ll attempt to fulfill throughout the course of the game.&#10;&#10;After a number of rounds the player with the most victory points wins the game, and is crowned greatest pier builder of their generation!&#10;&#10;