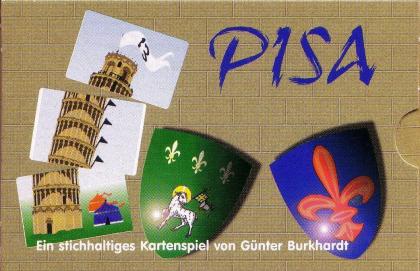 This is a trick-taking game, but with enough twists to give it a very different feel. Before each hand, players bid, one at a time, to determine three factors which will affect the hand:

Bidding is done by playing cards face-down from your hand. Players must bid 1 - 3 three cards on each of these categories. Once all three factors have been determined, players tally the value of the cards they played during this bidding process. The player who played the least value receives 4 (or 5, depending upon the number of players) victory points, with each other player receiving less points depending upon their total. Then, players must discard three of the cards they used in the bidding process, with the remaining cards being returned to their hands. This is usually a tough choice as often the conditions in effect for a particular hand turn out to be different than what you had hoped. This means that many of the cards you played may no longer be useful to you; indeed, they may be a detriment. So, deciding on which cards to keep and which to discard can be tough.

After this procedure is complete, A standard trick-taking game ensues. Points, however, are rewarded based on whether the goal was to take the most or fewest tricks. The player finishing with the most (or fewest, depending upon which goal was in force) receives 8 points (or 10 of playing with 5 players), the next player gets 6 points and so on down to 2 points. After a hand is completed, the entire process is repeated, including the bidding phase. A number of rounds equal to the number of players is played, with the player accumulating the greatest number of victory points being the victor.