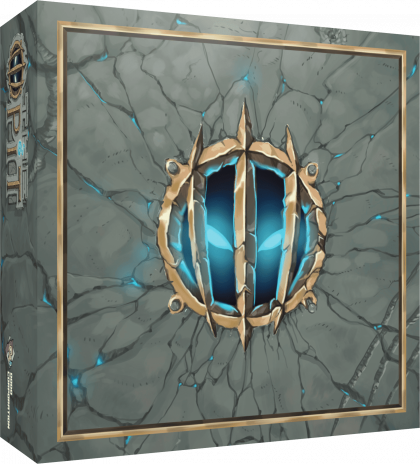 The Pit is a semi-cooperative dungeon/arena-crawler from 1 to 4 players with a duration of 8 rounds. In The Pit players act as legend who aims to obtain the absolute power contained in the depths of The Pit. In The Pit, you will not only have to fight for victory, but you will also have to work with your enemy to be able to destroy the seal of the Pit and defeat its guardian before the universe collapses and everything is swallowed in the nothingness. However, only ONE will be the winner... or NONE!&#10;&#10;The game is divided into 2 phases:&#10;&#10; The 1st phase: Through 4 rounds characters explore The Pit, which is filled randomly with events. In this phase, the characters will have to accumulate as much power as possible to enhance their abilities. &#10; The 2nd phase: During the next 4 rounds The Pit seal is activated by summoning an ancient Nemesis (Boss) into the battlefield. Characters must defeat it before the end of this phase, or the universe will collapse and the power of The Pit destroy everything.&#10;&#10;&#10;To win, players must defeat the BOSS before the end of the 8th round, then the victory points are counted. The player with the most wins the game.&#10;&#10;Otherwise, The game ends with the defeat of both players if the BOSS is still alive at the end of the 8th round.&#10;&#10;The Pit also offers a fully cooperative game mode, a solo mode, a boss rush mode and a sudden death mode more oriented towards PvP.&#10;&#10;The Pit is calling!&#10;&#10;&mdash;description from the designer&#10;&#10;