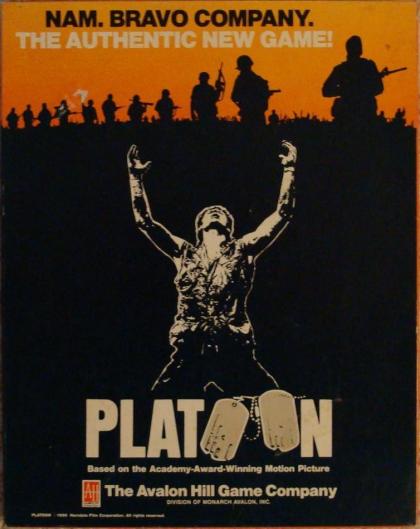 Platoon is a simple wargame on small squad combat in Vietnam. The game is similar to AH's Smithsonian series games: a single sheet with basic rules and a small booklet that contains advanced rules, additional scenarios and historical background information. The combat system is also similar to other Smithsonian games.

The scenarios and soldiers are based upon events and characters in the movie.

The game uses two elements to create fog of war:
- the counters have small stands so the identity of each counter is unknown to the enemy. Some of the counters are fakes and "substitutes" (these are used to combine several counters into a single group. All counters are placed in an off board box and the matching substitute counter is placed on the map.)
- Random initiative draw. Similar to Firepower, chits for each side are placed in a cup and each turn one is randomly drawn to determine which player may move.

Platoon had a AH complexity rating of 3.