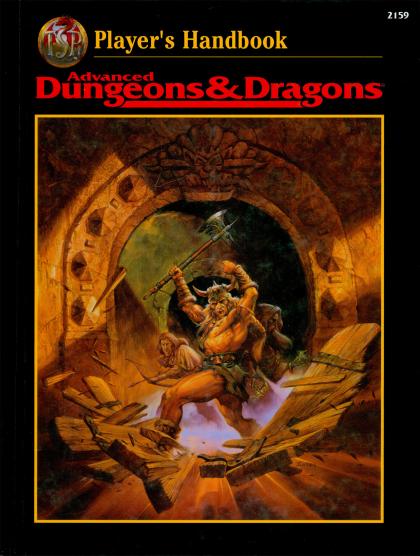 In 1995 TSR released a revised edition of the 2nd edition book. This was a borderline case of whether to make this edition its own item or a [version] of the first edition of the Player's Handbook for AD&D 2nd (Player's Handbook (AD&D 2e)). In the end, the layout changes and other smaller corrections were enough to trip the the 98.3% same content/layout rule we have in our Guide_to_Data_Entry and thus we created a new item entry for it.

From the book's intro:

Rest assured that this is still the same version of the AD&D game that your friends, classmates... have been playing for years.

Yes, there are some small and subtle changes in the rules, but you would have to read the whole book very carefully, and have a tremendous memory, to find them. (The changes are the sorts of minor corrections and clarifications we make every time we reprint and we've reprinted... more than 10 times since 1989!)

So what has changed? Obviously, the books look different. We were awfully proud of them when they released in 1989, but the world doesn't stand still for anyone. We decided that after six years, it was time for a new look.

And as long as AD&D was getting a new suit of clothes we elected to let out the seams a bit, too. Both books are a lot bigger: 25% more pages in the PHB, 33% more in the DMG. And we used them up just looking good. Inside you'll find bigger illustrations, lots more color, and pages that are easy to read.