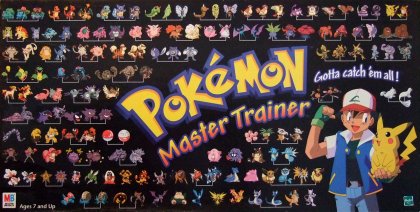 Based on the Nintendo Pokemon franchise, each player becomes a Pokemon Trainer (represented by Ash Ketchum figures) making his way around the pre-made board map to get to Indigo Plateau where he can challenge the current, reigning Pokemon Champion (represented by cards) to a battle with the Pokemon he's collected on the trip there. Item Cards give you or your creatures special powers and players can battle each other as well.&#10;&#10;