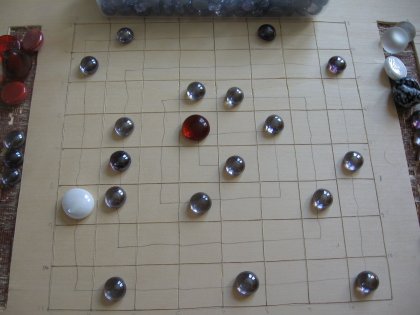 An abstract game played on a chess board with a common set of stones and few special pieces. The object is to get three or more stones in a row, using the combination of placing a stone (which can not be adjacent to any stone) and the using a power to push or pull stones -- either orthogonally or diagonally, or both -- but with the caveat that each power can only be used once until all powers have been used, then after an un-powered turn the powers are available again.

The ¡Luchacabra! website is currently unavailable. Try looking for the rules at: www.luchacabra.com/?p=32" rel="nofollow">http://web.archive.org/web/20080118033202/www.luchacabra.com... instead.