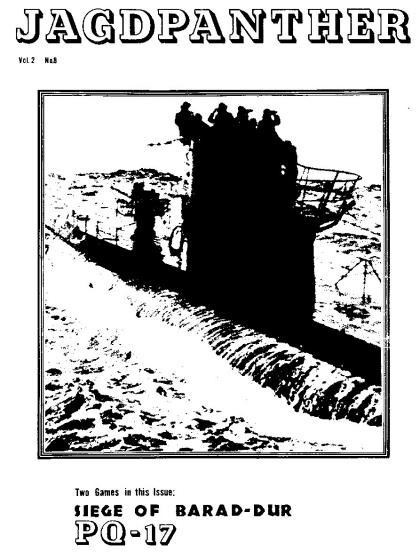 This game portrays the actions surrounding and involving the series of PQ (Scotland to Murmansk) convoys in the Second World War. The map covers the area of the Arctic Sea where the action took place.

PQ-17 appeared in JagdPanther magazine #8, January 1975 (along with the game Barad-Dur, 3430). It has amateur DTP production values. Many different types of ships are represented including Battleships, Cruisers, Destroyers, Merchants, Anti-Submarine Trawlers, Tankers, Escort Carriers, and of couse Submarines and U-Boats.

Employs a written movement orders system. There is a tactical board for combat. Rules for weather, fuel, British Home Fleet, convoy scattering, ice pack, airpower, ASW screens, torpedoes, and crew rescue are included. All this in just 4 pages of rules, plus 1 page of charts.