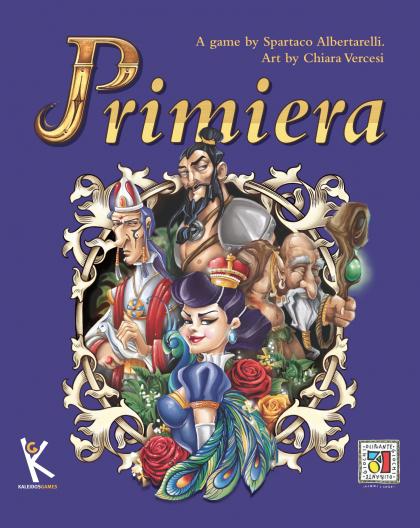 Four players compete in the card game Primiera to score as many points as possible, with the partnerships between players changing each round depending on who plays which card first — and sometimes it's every player for herself!

The card deck features forty cards in four suits, with each card featuring a "Primiera" value. Each round starts with four cards face-up on the table and nine cards in each player's hand. On a turn, a player must play one card to the table to try to capture one or more cards that sum to that card's value; if a player can't or doesn't want to do this, she must lay one card on the table. If you manage to clear all the cards from play, you score one point for a sweep.

The first player to lay down a Herald (which are all valued "1") determines her partner based on the direction of the arrow on that card. At the end of the round, teams combine their cards and score points, with each individual recording those points for herself. In the end, only one player can win!