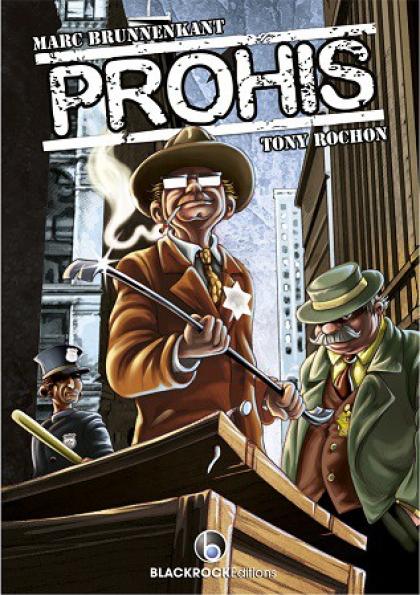 In the United States, during the 1920s, the Volstead Act forbids the manufacturing and sale of alcohol. Nevertheless, prohibition is going to represent a gold mine for smugglers who dare to challenge the authorities. From the hooligan to the respected politician, many people have tried their luck on this lucrative market, yet it remains a dangerous activity since the agents of the prohibition — the Prohis — roam around...

In Prohis, each player embodies a smuggler who tries to make a fortune by transporting illegal goods — a highly precarious activity since the other players have the opportunity to check your cargo or even seize it if they find suspicious items.

Each player starts with an Inspector, a Captain, and a hand of four cards, with the deck being comprised of legal goods, illegal goods, and Lieutenants. Four cards are placed face-up on the table. On a turn, a player either draws 1-2 cards from those on display or from the deck, or attempts to smuggle a convoy of 2-4 cards by placing them on the table face down.

When smuggling, each other player gets the chance to throw a cargo controller at the smuggled goods, with the highest valued controller taking charge of the inspection. The cargo mover can try to bribe the controller to make this trouble go away, but if that doesn't work an Inspector, the highest rating, can look at three cargo cards, a Captain two, and a Lieutenant one. If the controller reveals an illegal good, the owner of that card gets to seize all of the cargo, placing it and her controller in her warehouse; if all the goods are legal, the shipper claims the cargo in the warehouse and the controller in hand. If a controller awaits among the cargo, then this informant has been revealed and the inspection fails.